The Hidden Charm of Penang, Malaysia

I’ve always wanted to visit the charming state of Penang, Malaysia. Luckily, we have our co-blogger Cecille Bawasanta to give us a little snippet of her adventure to the area. To follow her adventures, check out her colorful and inspiring Instagram: @cecille_seashell/.

Things to do in Penang, Malaysia

When you hear Malaysia, the first thing in mind would be the famous Petronas Towers in Kuala Lumpur, but my first trip to Malaysia wasn’t in KL, but on a small island located on the northwest coast of Peninsular Malaysia. Penang Island is listed as a UNESCO World Cultural Heritage Site and regarded as the food capital of Malaysia.

Living in Bangkok has a lot of advantages especially when travelling. The country is well located so there are several flights easily available from Bankok airport to other parts of the world. After work on a Friday, I hopped on a motorbike with my luggage, got on the train and went straight to the airport. The flight was only 1Hr 20mins to Penang so when I got there, I was ready to explore!

Penang has a lot of heritage hotels so we decided to stay in one at the Muntri Grove Heritage Hotel. This was built in the 19th century and was originally a row of 10 modest houses as quarters for the servers of some wealthy families in Muntri Street. This house was restored back in 2011 where the architectural framework was maintained as close to its original form.

We didn’t go out when I arrived because we had to wake up early for our hike to Penang National Park the following day.

The next morning, our local friend picked us up at the hotel to have the standard Malaysian breakfast before the hike. It really is nice to have friends from different parts of the world and experience the place from their perspective.

We had different types of Roti for breakfast and my favorite was the roti canai!

After breakfast, we headed to Teluk Bahang, the entry point of the jungle hike. Hiking to the national park is free of charge; you just need to register upon entry. You can also book a boat to go to the different beaches or pre-arrange a boat to pick you up after the hike.

So our hike begins!

The Penang National Park is the smallest national park in the world. However; it is home to a lot of tropical plants, wild monkeys, and even cobras. Yes, cobras! They said that the biggest cobra in Asia was found in Penang so I was really excited and a little scared during our hike.  The tracks through the jungle were not too easy if you’re a first-time hiker. The first part of the hike was uphill and sometimes the footpaths are narrow and made of sand. The trail was also a little muddy but we were lucky there was no rain or the hike would have been more difficult. We also saw wild monkeys along the way which made the trek feel more exotic. I was a little nervous though because they said these monkeys can get rough! I tried my best to not get too close. 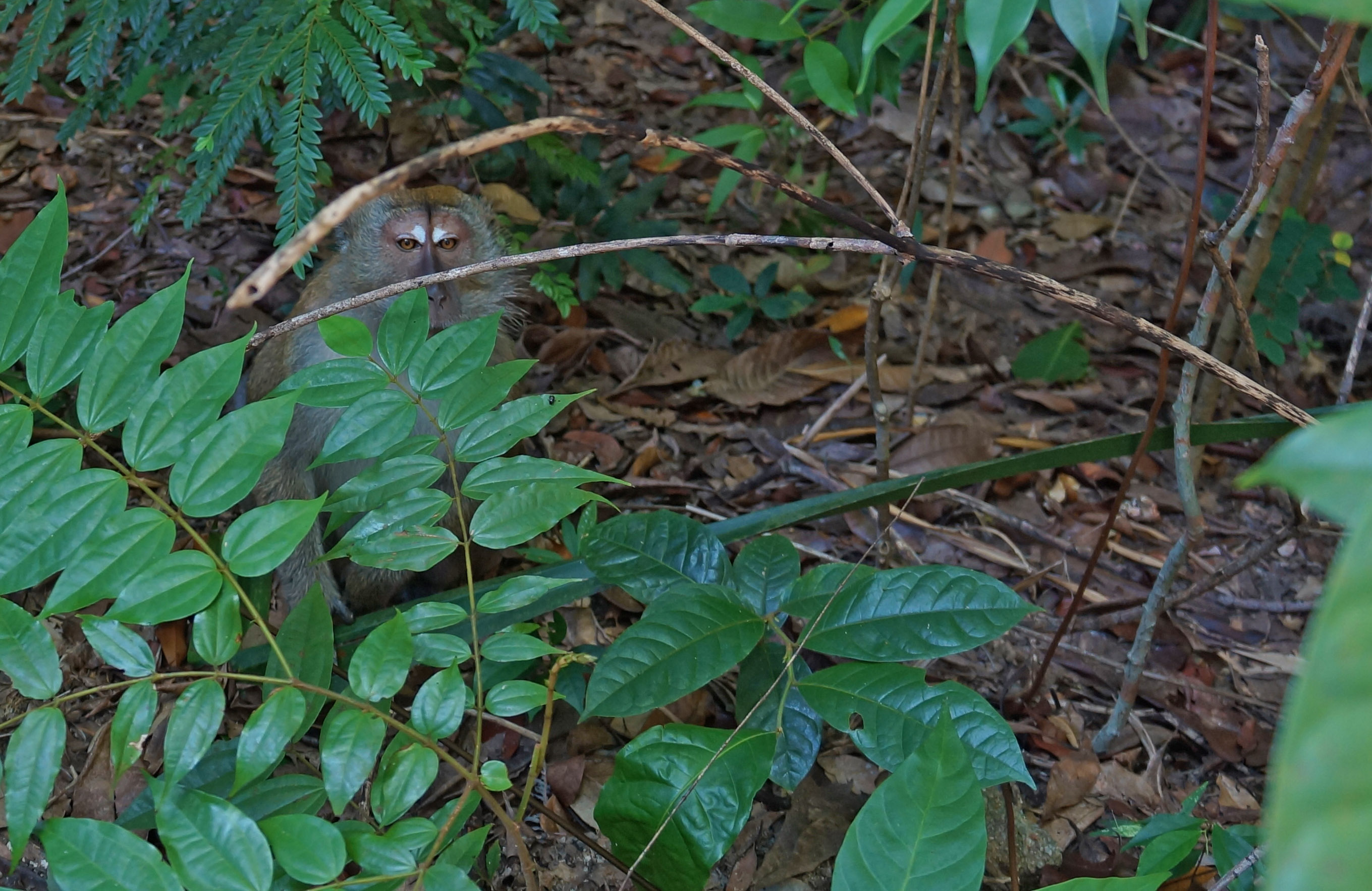 It took us about 1.5 hours of hiking to arrive in Turtle Beach. I was so excited because I’m obsessed with baby turtles! When we got there I noticed nobody was swimming. Initially, I thought it was because it was too hot, but I found out that swimming is no longer allowed due to the drowning incidents that happened. The turtle sanctuary was also located on the beach and baby turtles are kept there until they are old enough to have a chance of survival in the wild. We sat on the beach for a bit and played frisbee while waiting for our boat taxi to take us to Monkey Beach. 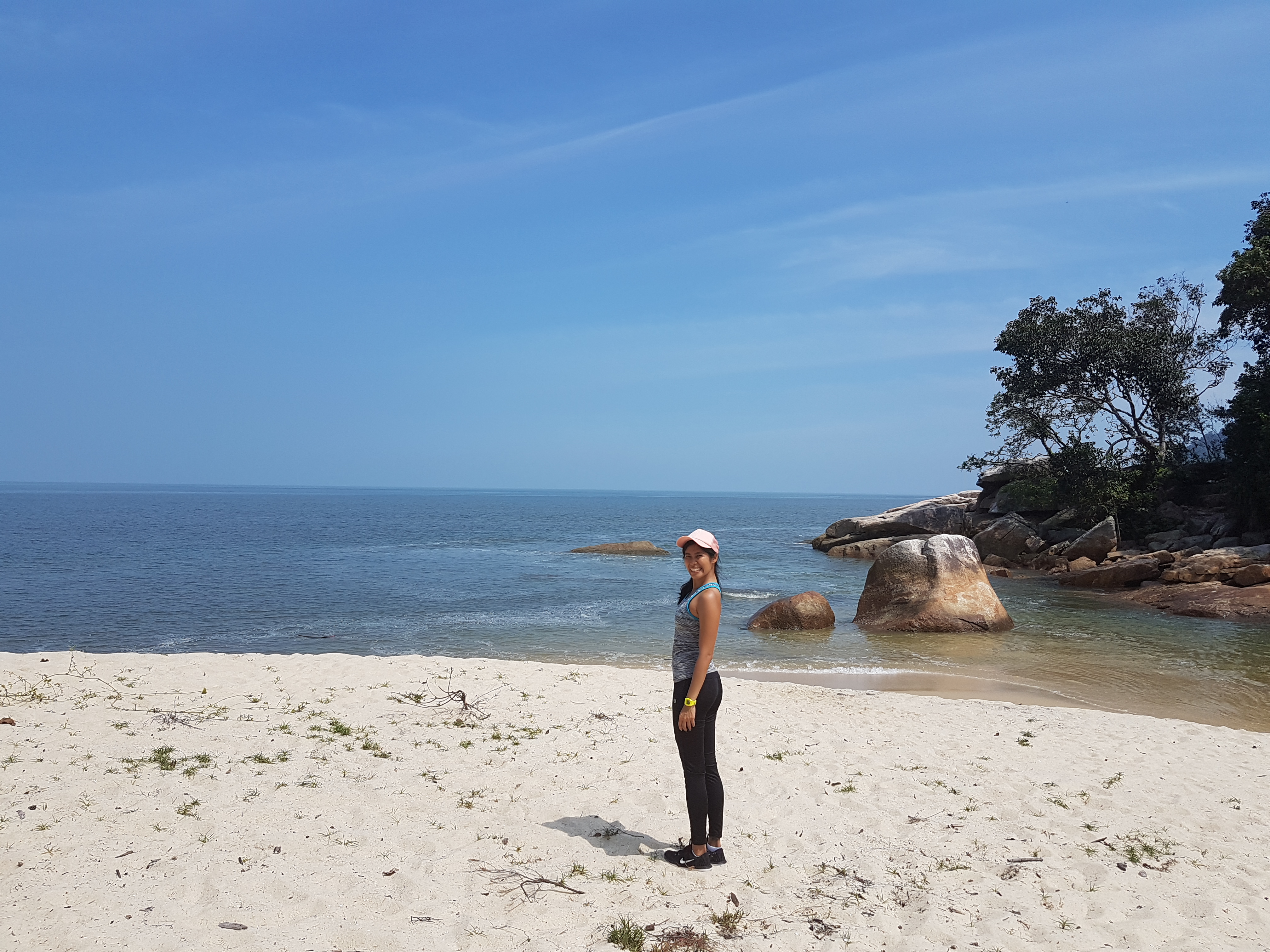 Finally, our boat taxi arrived to take us to Monkey Beach! 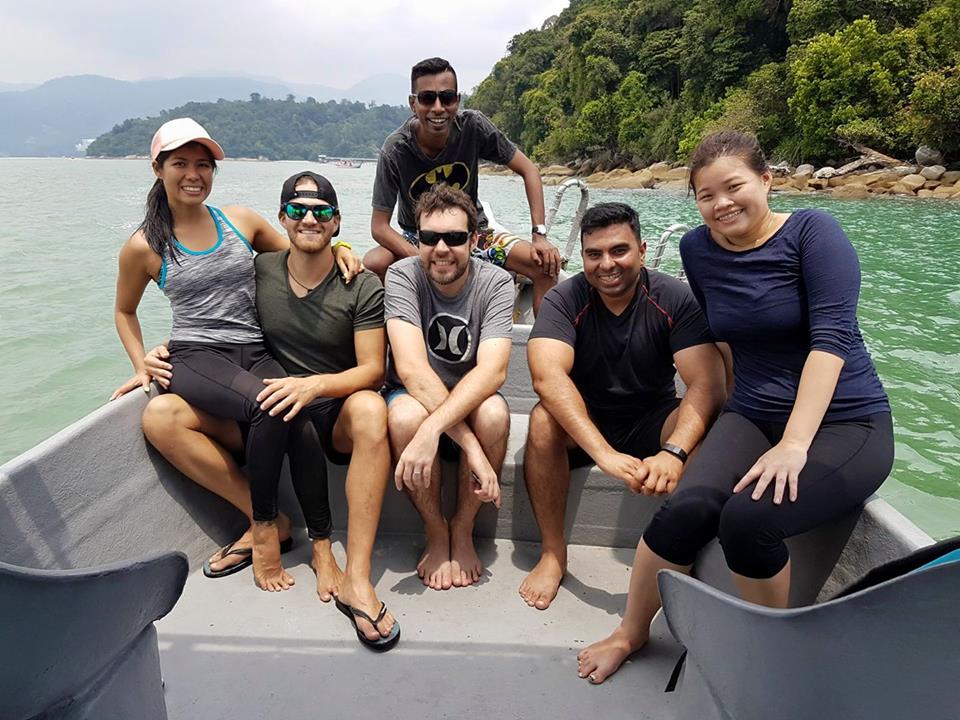 On the way to Monkey Beach we saw cool rock formations. I didn’t get to take a photo though but we saw a rabbit, a turtle, and a crocodile rock formation! The water on the beach was a shade of jade which reminded me a bit of El Nido, Palawan in the Philippines.

We went back to the hotel to refresh before heading to Georgetown, the capital of Penang. This city is a great example of the multicultural society in Malaysia. Chinese is the majority of the nationalities that live in Georgetown. Other ethnicities common in the area include Indians, Malays and a sizeable expatriate population from various Asian and European countries. The most popular attraction in Penang is the street art you can see randomly when you walk around town. You can actually download the art map if you want to know where they are located.

After the street art tour, we went for some Indian food before heading to have a few drinks at Love Lane!

The next day scheduled a temple tour, first stop the was the Kuan Yin temple. But before the tour, we went to The Mugshot Café at Chulia Street to get some coffee and bagels. I had the best bagels at this place; served fresh out of the oven!

This temple was built in 1728 which makes it the oldest one in Penang. There wasn’t really much to see there, we were just people watching at that temple. It was also funny when we were there; we got approached by a group of people who were doing a race. They were asked to find a blond foreigner with long hair wearing flip flops; Manny fit the description to a T! 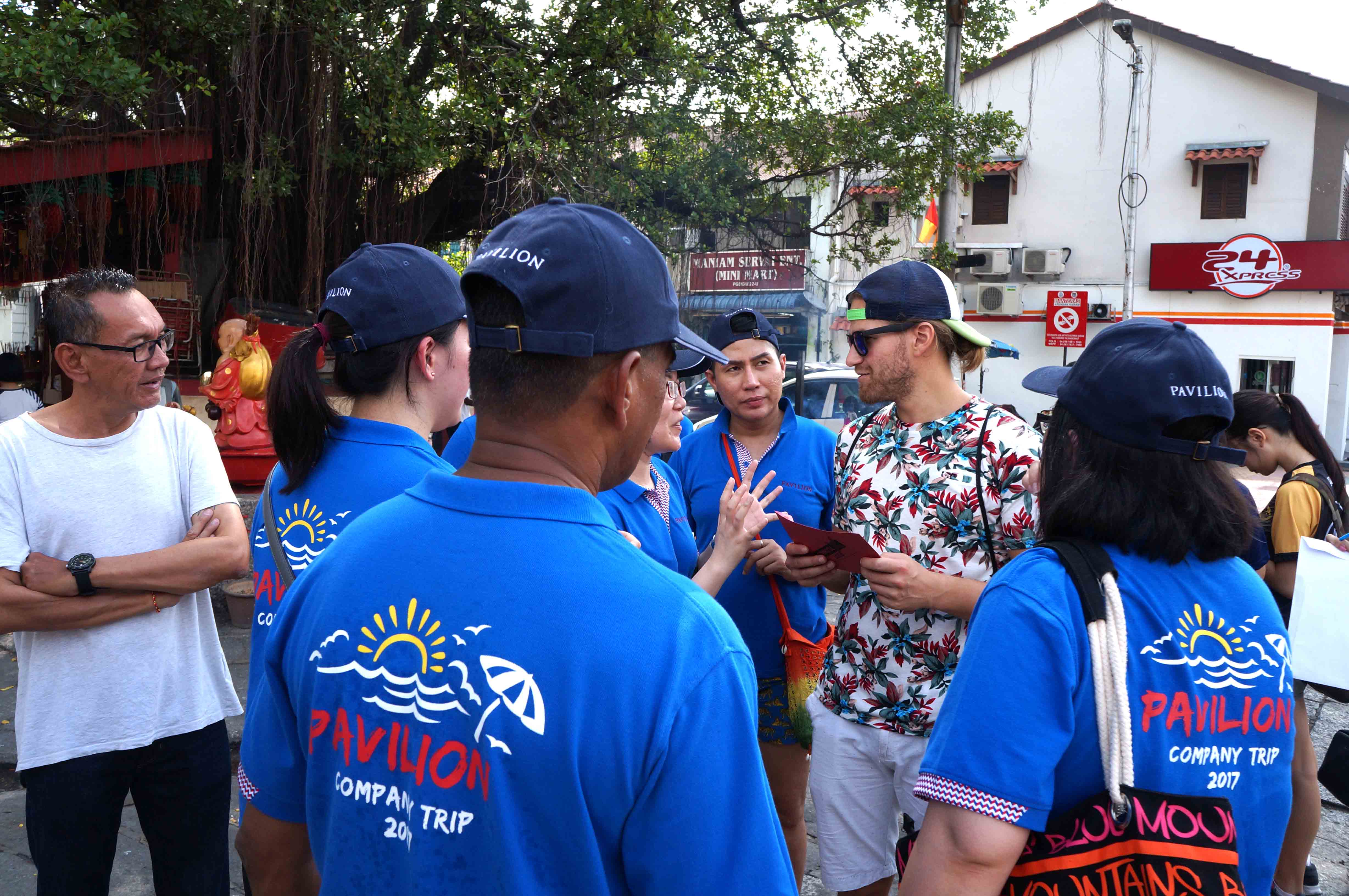 We then headed to the largest Buddhist temple in Malaysia, the Kek Lok Si temple. By the way, Uber is the best mode of transportation Penang, they are everywhere and cheap.

This is by far the finest and most colourful Buddhist temple I’ve been to! It’s located on top of a hill overlooking the ocean. You can see a pagoda on the temple which is of Burmese, Thai and Chinese architectural design. You can also see the huge bronze statue of Guanyin, the goddess of mercy which is 82.7 meters in height.

After visiting the temple, we had some food at a random food court few minutes from the temple and had some laksa!

The next day we went back to the Mugshot café again! After breakfast, we headed to the Penang Botanic Gardens.

The garden was so huge and is divided into 12 sections.  There you’ll find different types of trees and exotic plants. Monkeys also roam freely at some parts of the garden and you have to be careful around them. They can attack and bite you if you give them food or show them attention. The park is so peaceful especially if you sit by the stream or just hang around by the grass. 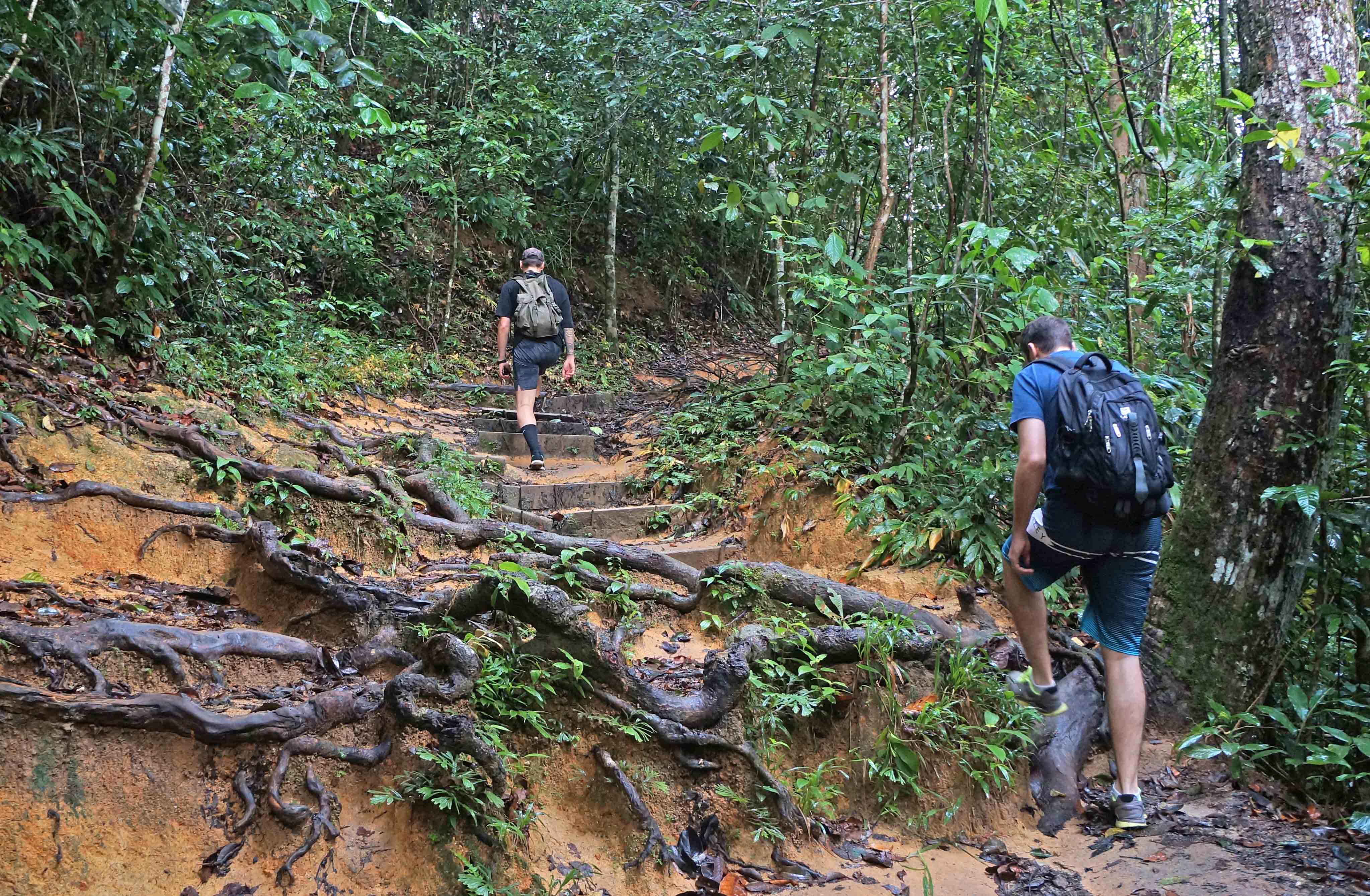 Our last day in Penang was saved for the Penang Hill hike. There are a lot of ways to get to the top of Penang Hill, you can hike up or take a car or the funicular train. We took the longer and more difficult route up and hired a jeep to take us down. We started at the Moon Gate!

The moon gate trail is definitely not for the weak! It takes about 2.5- 3 hours of hiking to reach the top. It starts with a 30-minute uphill stairway path, which was really challenging but fun at the same time. The jungle was a bit moist and muddy from the rain the night before so I’m happy I brought my old shoes.

It was a really nice jungle, it was a bit foggy and the breeze was cool. We saw a lot of exotic trees and wild animals. We saw monkeys, black squirrels, pretty birds and one of our friends even got a leech stuck on his leg!

We got a bit disappointed when we reached the top, not because of the view but because they built some sort of theme park.  It was just a bit chaotic for us especially after our 3-hour uphill hike, we just wanted peace and quiet. There are a lot of things to see at the top actually, dinosaur world for the kids or you can take cheesy photos with your loved one under a big heart. The best thing you can do at Penang Hill is go to The Habitat which is an eco- friendly nature trail. We were a bit tired to go on another trail so we decided to skip it. I think it would be better to take the train up and go to the Habitat to enjoy a walk in nature without 3 hours uphill hike.

What we really liked on Penang Hill was the tree that was full of dusky leaf monkeys! They had white circles around their eyes and they were not aggressive like the Macaques. We also had a few drinks at the sky bar before heading back down! The queue at the train was so long so we decided to hire a jeep to take us down instead. 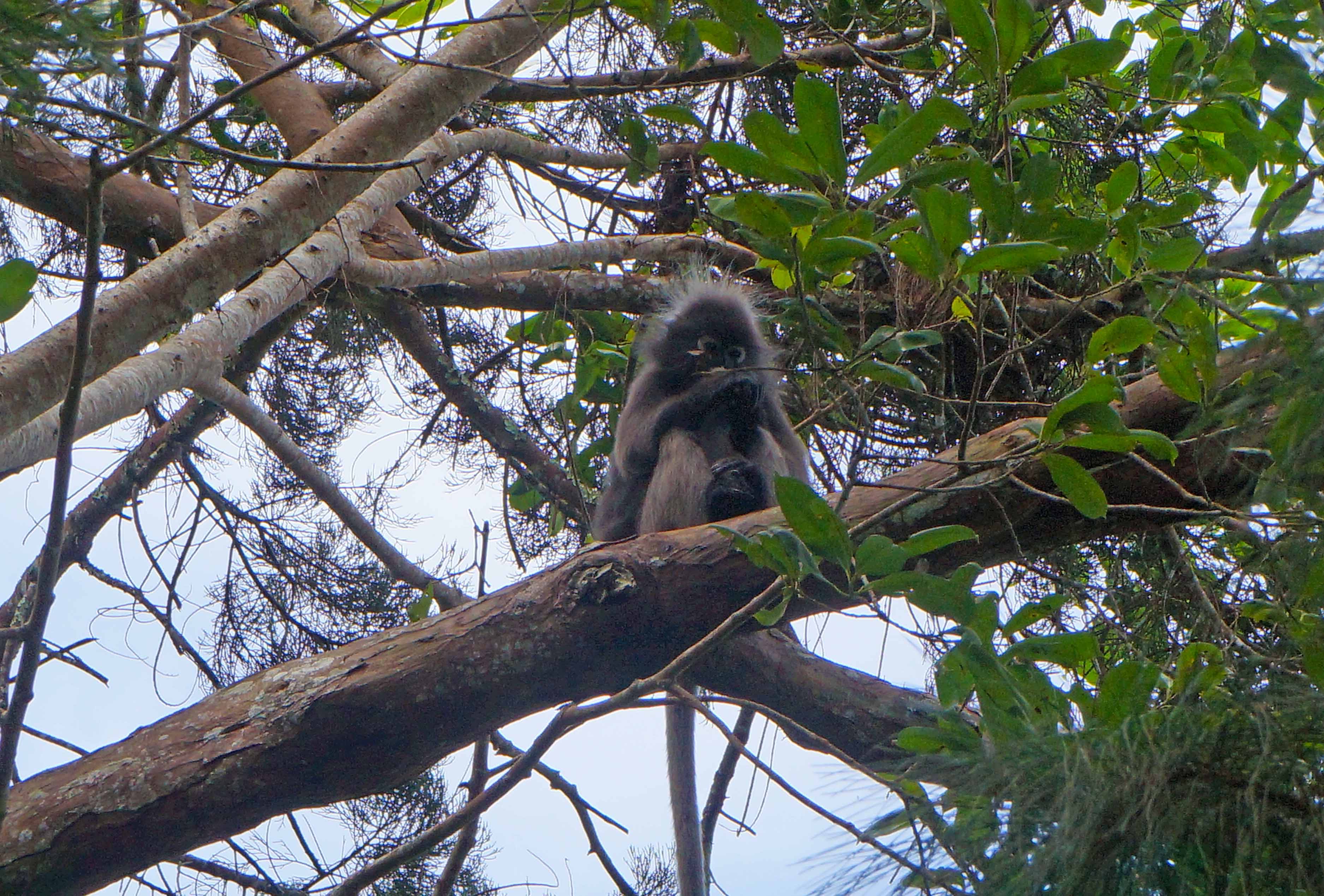 Penang is such a lovely state with so many different activities. If you have time and don’t know where your next adventure should be, I suggest visiting Penang! It’s very picturesque and also a good option for food adventures and physical adventures!

Check out their previous article: Euro Road Trip: How To Travel to Three Different Countries In A Week

Do you want to share your travel stories with us? Contact us via our social media links below!

2- Week Budget Tour for the Philippines

Niagara Falls – A Place You Need To...

This site uses Akismet to reduce spam. Learn how your comment data is processed.

Welcome, traveller! We are two friends, Natalie & Natasha who love travel, adventure, and discovering new places. We aim to inspire the benefits of travel and give practical tips for smart travellers like you. Follow our journey!

This website uses cookies to improve your experience. We'll assume you're ok with this, but you can opt-out if you wish. Accept Read More